Statement of Racine Dominicans on Concerns about Executive Orders

February 1, 2017, Racine, Wisconsin – In response to executive action signed by President Trump on immigration and refugee resettlement and action to advance construction of the Keystone XL and Dakota Access oil Pipelines, the Racine Dominican Executive Committee has issued the following statement:

Racine Dominicans deplore actions taken most recently by President Trump on immigration and refugee resettlement which threaten border communities, force our immigrant community members further into the shadows and endanger those fleeing violence. These orders do nothing to make anyone more secure and may well have the opposite effect.

We are appalled by President Trump’s order which also bans residents of seven Muslim-majority countries from entering the U.S. for 90 days, suspends refugee resettlement entirely for four months, and bars resettlement of Syrian refugees indefinitely. This is unconscionable in the face of the unprecedented global refugee crisis. Racine Dominicans will continue to stand in solidarity with families, regardless of immigration status, who labor daily to provide safety and security for their children.

Furthermore, we also deplore the steps taken by President Trump to advance construction of the Keystone XL and Dakota Access oil pipelines. These actions send a dangerous signal about our nation’s commitment to the COP21 Climate Agreement and pose a threat to drinking water and sacred sites of our Native brothers and sisters. We call on President Trump to reverse these actions and take steps to lead our country toward a new carbon-free economy and a more humane society of the 21st century.

Racine Dominicans, a Congregation of 120 vowed women religious and over 50 associates, traces its roots back to St. Dominic in the 13th century.

These times present serious and complex issues about which we must be informed. Immigration is a justice issue.

Catholic Social Teaching has long taught us that:

We affirm the need for elected officials to enact legislation that includes:

We acknowledge the right of our government to enforce the law and protect our national security, but we also recognize that our existing complex and unworkable immigration system is broken and needs to be fixed!  Most immigrants in the United States are here to support their families; they hope to reunite with their loved ones, but current immigration policies prevent that from happening.  We urge our elected officials to conduct the immigration reform debate in a civil and respectful manner, taking care not to blame the immigrants for our social and economic problems.  It is our hope that the legislative process will produce a just immigration system of which our nation of immigrants can be proud. 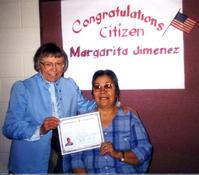 “...Our immigration system is badly broken and requires reform. In order to fix the system, we must bring undocumented persons out of the shadows and put them on a path to citizenship. This would help stabilize immigrant families and our workforce in many important industries. We also must create legal avenues for migrant workers to migrate legally and safely into our country to perform important jobs in crucial industries in our economy. Finally, we must ensure that families are reunited in a timely manner.”

The United States Bishops have stated clearly and strongly that comprehensive immigration reform must include:

One of the many critical and complicated justices issues facing our nation and Church right now is that of immigration reform. We invite you to learn more about this issue: