Racine Dominican Sister Rose Marie Anthony of the Siena Center was also given a Community Policing Award for her work to end human trafficking in the Racine area.

Kari Hemming, executive director of the Fight to End Exploitation, said Anthony was significant in starting the organization.

“She really made it a priority to make sure human trafficking (issues) was on the forefront of our community,” Henning said. “I don’t know if we were so impressed that a nun was talking about pimps and Johns, or if we were excited about her passion. She really, really was inspiring and she’s been a mentor to me.”

Anthony was thankful to receive the award, but reminded the crowd that more work needs to be done on human trafficking.

“Get yourselves educated, educate others and then be sure that we can all work together and keep this thing out of the way, get it out of here,” Anthony said. “It’s a terrible, terrible problem in our area and we want it to be eliminated.”

The following was included in the    Racine Police Department 2015 Annual Report in a write-up titled, "Racine Coalition Against Human Trafficking":

"In 2012, the Racine Dominicans launched an aggressive campaign designed to bring attention to the issue of human trafficking locally and beyond. The Racine Police Department was quick to partner with the Dominican Sisters in this important matter of public safety. What began as a small community gathering rapidly evolved into a community-wide movement in the fight against human trafficking.

Noteworthy Milestones
(as listed in the police annual report):

Along with the entire congregation of Racine Dominicans, Sister Rose Marie Anthony has provided strong leadership in the fight against human trafficking."

Please read the rest of the write-up from the photo below... 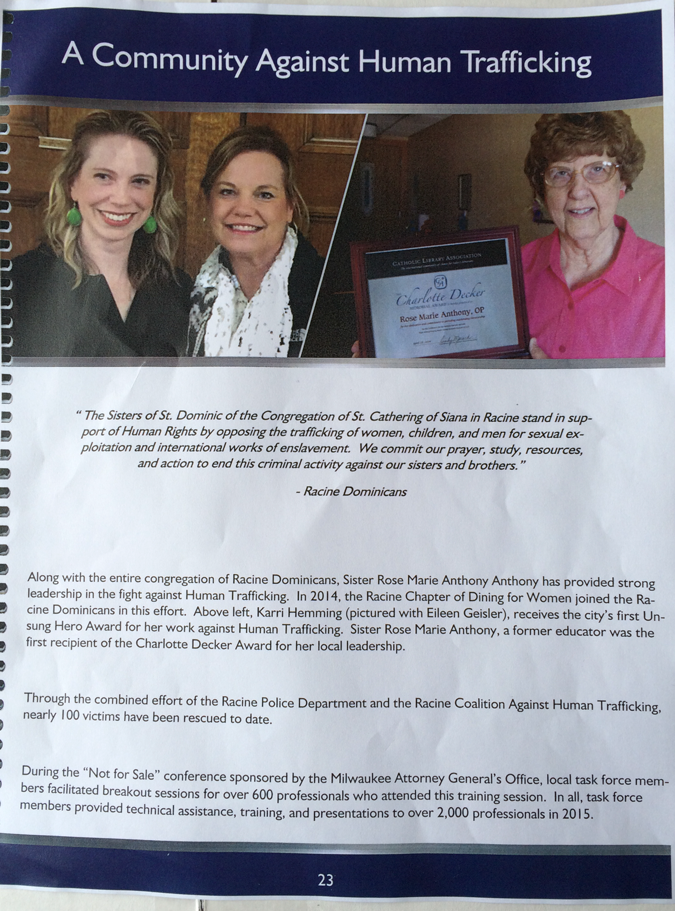