The Senior Companion Program was created as an outreach endeavor of St. Catherine's Infirmary on July 1, 1978.

It was then was a licensed nursing home at Siena Center, the motherhouse of the Racine Dominicans - 5635 Erie Street in Racine, Wisconsin.

The program was founded to alleviate the loneliness of the many elderly men and women in Racine County by providing companionship and linking adults with their churches and other community resources, thus enabling them to live out their later years with hope, meaning and dignity.

Racine Dominican Sisters Michelle Olley, OP, and Brenda Walsh, OP, took the lead to create the Senior Companion Program. They labored hard and long to seek funding, to recruit and train volunteers, and to preserve the purpose of the ministry. As a result, SC Johnson & Son Inc. bestowed a grant for the new program and Ss. Emily Oszewski, OP, and Brenda finalized the guidelines for its use by working with the company.

From 1978 to 1980, S. Michelle served as the first director of the program. By 1980, Senior Companion Program consisted of a program director, 15 staff members, six of them Racine Dominican Sisters (Ss. Christine Hillebrand, Blanche Arendt, Winifred Edelbeck, Mary Hanauska, Mary Cleoph Peil and Cleta Freiburger), and eight lay volunteers. At that time, about 200 visits and 400 phone calls were made to 70 Racine-area visitees.

Funding continued from SC Johnson & Son Inc., Racine Dominican Grant Fund, the State of Wisconsin and Frank Gentile Oldsmobile, which provided the use of a station wagon. 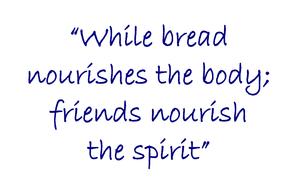 From 1980 to 1982, S. Emily Oszewski was the director. The program continued with a staff of six, along with 36 volunteers to visit 130 older adults. The program was driven by the philosophy that "we do not live by bread alone; friends are a necessity of life. While bread nourishes the body; friends nourish the spirit, communicate self-esteem and a sense of worth, and give us a reason to smile."

In 1982, S. Brenda became program director. In its fifth year, the Senior Companion Program had more than 50 volunteers and several staff. Laverne Poplawski was coordinator of volunteers.

In April, 1984, 70 people attended an appreciation dinner at Siena Center. The program was serving 270 older adults with a staff of 9 and 75 volunteers.

In May 1992, volunteers and staff on the Senior Companion were recognized by President George Bush as the 780th Daily Point of Light.

On January 1, 1994, St. Catherine's Infirmary closed and the sponsorship of the Senior Companion Program was moved to Racine Dominican Ministries Inc., which continues as the governing body of the program.

In 1997, the Senior Companion Program celebrated 20 years of caring presence. There were 302 visitees being served at that time by 137 active visitors.

In spring 2002, S. Brenda left the directorship of the Senior Companion Program, but on this day continues to be a very active volunteer.

On July 1, 2002, Gloria Brown became the fourth director of the program, which was relocated in the B-Wing of Siena Center. By spring 2003, the program staff included the director, an assistant and a bookkeeper, as well as four people who served the program through a "Senior Aide program" for 10 to 20 hours per week.

July 1, 2010, Racine Dominican S. Joyce Ballweg became the fifth director of the program. It currently serves 200 individuals in their homes, apartments, assisted living facilities or nursing homes. There are 50 volunteer visitors, including sisters and lay people who visit, call and/or correspond with visitees. The program is supported by individuals, organizations and churches, which provide financial support, food, clothing, household items and spiritual or personal assistance.

June, 2013, Sue Craanen became the sixth executive director of the program. Senior Companion Program, Inc. is now established as a non profit program, which became effective on September 1, 2013.  As a non profit, SCP is responsible for writing grants and fundraising. There are approximately 120 individuals being served by the program. These individuals are living in their homes or apartments, nursing homes, and assisted living facilities. There are 50 volunteers and SCP continues to be supported by grants,  individual donations, other organizations, and churches.

In May of 2014 the Senior Companion Program, Inc. headquarters left the Siena Center Campus and SCP is now operating out of its new office located at 521 - 6th St. In addition to executive director Sue Craanen, the program also employs Laurie Radewan as the fulltime assistant director and Jeanne Kocha as the part-time office assistant.

The Senior Companion Program is always in search of companions. If you would like to become a Companion, contact: