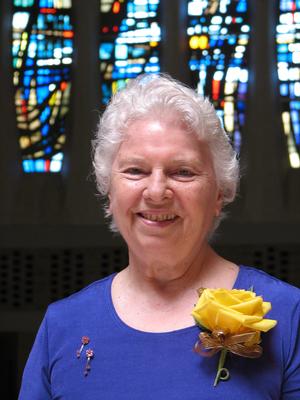 Growing up on a farm near Gratiot, WI, and later Monroe, Rose Stietz was called by the Holy Spirit to the Racine Dominicans when she was 19 years old. She entered the community a year later; at Reception she was given the name Sister Gretchen, which she kept until she returned to her baptismal name after the Vatican II Council.

S. Rose has been committed to non-violence for decades. “My involvement with the United Farm Worker Movement and Clergy and Laity Concerned (against the Vietnam War) in the late 1960s opened my being to pursue a non-violent lifestyle,” she reflected.

Her six months spent in India in 1984 confirmed that non-violent pursuit as a lifelong commitment. “Hopefully, this commitment permeates my day-to-day ministry,” she said.

One way S. Rose gives visible witness to her Racine Dominican mission, “committed to Truth, compelled to Justice,” is by leading a prayer at the site of most Milwaukee homicides. For nearly two decades, she has coordinated these prayer vigils for MICAH (Milwaukee Innercity Congregations Allied for Hope). She is also active in Milwaukee’s Citywide Housing Coalition, Central North Community Council, Greater Milwaukee Rescue and Restore, Milwaukee Commission on Police Community Relations, Fifth District Crime Prevention, environmental issues, and the Call to Action Antiracism Team (for Catholic Church reform).

S. Rose would like people to know “Racine Dominicans are aware of the world around us: the positives and the negatives,” she noted. “We have taken our stand for justice – committed to promote the positives and right whatever wrongs we can in association with others who have like vision.”