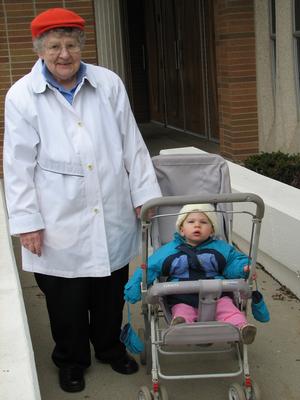 Bernadette Weinberger may have inherited her mother’s desire to become a sister, though she didn’t know it. As a young girl, her mother asked her parents (Bernadette’s grandparents) if she could enter the convent but was forbidden to do so.

When she was in fourth grade, Bernadette decided she wanted to be a sister so she could take care of the “pagan babies” in mission countries. As a teenager, she accompanied her mother from Mayville to Racine for the reception of S. Imelda Kaltenbach, and when Mother Romana asked if she would be joining the Racine Dominicans, Bernadette said yes.

For over 50 years S. Bernadette served in ministries from cooking and baking to building maintenance, from gardening and sewing to hair care (after the habit change in the 1960s). “And I wouldn’t give it up for anything!” she said. Though not all assignments were easy, “I never regretted a day of it. If God wants you there, that’s where you’ll be.” She is grateful for her vocation and wouldn’t change anything about her life in the community.

From 1965-1987, S. Bernadette oversaw the maintenance and grounds of Siena Center. During this time she also cared for the children of an Egyptian couple who lived nearby. When the couple returned to Egypt and realized they needed help, they asked if she could come. For three years S. Bernadette worked in Cairo, helping the family and also working with the poorest of the poor – “garbage children,” they were called. She fed and diapered and shared her love with children of the streets whom no one wanted.

S. Bernadette would like people to know that the Racine Dominicans are open to change, and they move forward according to the needs of the times. The community continues to learn and reach out to people in whatever ways are needed. To younger sisters, she offers an exuberant, “Keep up the good work!”