“We are still finding body pieces.”

“My job was to gather the body pieces after an IED explosion, trying to keep pieces from one body together.”

“My uncles were cut in pieces.”

I heard the first statement in 2001 when I volunteered at the rest station set up for first responders in
St. Peter’s Church near Ground Zero in Manhattan. The second statement I heard during an NPR interview with a marine. 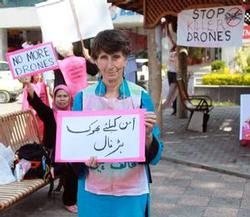 I heard the third statement earlier this month as I sat on the floor in the office of the Foundation for Fundamental Rights (FFR) in Islamabad, an organization that provides legal aid for victims of U.S. drone attacks in Pakistan. Shahzad Akbar, founder of FFP, had invited—or more accurately, challenged—Medea Benjamin, co-founder of the anti-war activist group CODEPINK to bring a delegation to Pakistan to meet with victims and survivors of drone attacks.

So, on October 4, thirty-four of us U.S. citizens and one Canadian sat on the floor listening. Kamir Kahn, a survivor in his fifties, wearing traditional tribal garb, told of the drone attack on his village on December 31, 2009, that killed his 18-year-old son and his brother. He picked up their body pieces for Muslim burial.

Body parts. I invite us to say the words slowly: body parts. A body ripped apart by an airplane crashing into
a building, by an IED, by a drone. In Waziristan, we must picture not only the limbs of women and men,
but also the severed head of a child.

Noor Behram, a brilliant, committed Pakistani photographer, overwhelmed the delegation with his photographs of children killed in drone attacks. They are not pleasant to look at. Why does Noor take on this horrific mission? Why does he drive seven hours to take the picture of a shrapnel-riddled child before he is buried?

He does it for the same reason that I went to Pakistan—to give the lie to the official report from the U.S. government that drones are smart weapons, that in the past year not one single civilian was killed in a drone attack. Noor has no images of women killed by drones. This does not mean that drones spare women; Islamic custom forbids photographing women. Noor, however, does his best to work around this law. He photographs the bloody clothing of women. And in one photo of a dead woman with a dead child, he cut away the image of the mother. We could see the curves of the child holding on to his mother’s body.

A gruesome topic—body parts. Disturbing to our protected sensibilities. We were so maddened by body parts falling from the towers of the World Trade Building, we determined to blow other people to pieces. We mourn over our own women and men blown apart by IEDs; yet we continue to slice the heads of babies with drone strikes.

Karim, Noor, and the hundreds of Pakistanis we met gave us a strong mandate: “Tell your government to stop sending drones to Pakistan.”

Read S. Pat's articles on "Smart Drones,"  "Why Do They Hate Us?" and "Citizen Diplomacy."