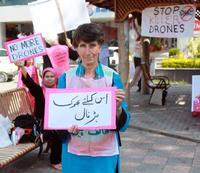 When I told my friends that I was joining Code Pink delegation to Pakistan, their responses ranged from “You’re crazy!” to “You’re brave.”  Both of which suggest a monochromatic picture of Pakistani people as dangerously hostile to Americans.

I am pleased to dispel my friends’ misperceptions.  To begin with, when a four delegates arrived at the Islamabad airport at 3:00 a.m., they were greeted by a cheering group of Pakistanis showering them with rose petals and presenting them with bouquets.

That was just the beginning.  Everywhere we went, we were welcomed warmly.   People were so very grateful to meet Americans who opposed the U.S.  government’s policy of drone warfare.  They seemed almost overwhelmed:  “You came all this way?”  At the press conference for Imran Kahn’s (a candidate for Prime Minister) Peace March, we were invited to stand to be introduced to the local and international journalists.  Medea Benjamin, leader of the delegation, spoke before the bank of microphones and cameras in the room.  Several days latr, we were celebrated in a grand manner next to Imran Kahn himself at a rally with about two thousand cheering fans.

On October 9, sixteen delegates fasted publicly to call attention to the horrific effects of drone attacks.  We chose a gazebo in an open space in a large shopping area.  All day, Pakistanis came to us to express their welcome and their gratitude for our presence.  I, personally, enjoyed my conversations with merchants as I wandered into handicraft shops.  I was particularly touched when a young woman from a group I was chatting with left the group and returned with a small bag, which she gave to me.  Inside was a lovely bracelet of multi-colored glass beads.  She had slipped away from the group to the store nearby, where she bought a gift for this American.

Our citizen diplomacy works both ways.  As we brought a friendly American face to Pakistanis, so we return to bring friendship from Pakistani people.  As Imran’s sister Aleema said of the Code Pink delegation, “You have done more than the billions of dollars from USAID to win the minds and hearts of the people.”