“We stand a chance in every life journey
to find a place where my ‘deep gladness’
meets with the ‘world’s deep need.’”
- Parker Palmer 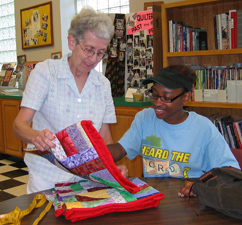 For over 20 years Racine Dominican Sister Joann Blomme has served as a counselor, licensed by the state of Mississippi, in a rural medical clinic of the Mississippi Delta. “I was drawn to the South in the early 1970s,” she reflected. “I had worked for eight years in Racine inner city schools with many families who had migrated from the far south, especially Mississippi and Louisiana.”

As she came to know these children and their families, a strong desire grew in Sister Joann to visit the areas from which they came. When the opportunity arose, she seized it. “I learned of the need for a counselor in Tutwiler,” she recalled. “As I traveled south to interview, I wondered if I really wanted to move so far away. Very quickly after arriving, I knew that distance was not what the decision was all about! I was soon captured by the spirit of the place, the warmth of the people, and the ministry it involved.”

Early on Sister Joann discovered it is not so much what she does that touches people’s lives, as just being present “in all sorts of circumstances, at all sorts of odd times, letting folks know simply that I walk beside them as they grow in the ability to face all that life tosses their way.” 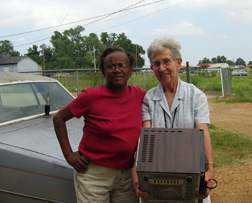 Of her years spent with the people of Tutwiler, Sister Joann reflects:

So many conversations have opened my eyes to life on the other side. Listen to a few of the words and lessons that have touched my life …

• Regarding listening, hear an elderly uneducated man: “I like to talk with people who know how to talk to you. Not someone who talks about stuff you don’t even know about.”

• Regarding leadership, listen to a sharecropper reminiscing: “When I had workers, I didn’t “tell” them what to do, I “asked” them, and then I showed them by doing the first round.”

• Regarding relationships, hear what was said to me: “You’re the first person I feel connected with right from our very first meeting out in the hot sun. You seem interested in me but I don’t know why.”

• Regarding the role of educated people: “I never went one day to school but with some educated people God hasn’t come near their heart. They forget they are educated to now help put the uneducated on the ‘top shelf’ with themselves.”

• Regarding racism, hear the pain: “Long ago and into new times, I could never invite someone white like you into my home to sit on my couch. There was no reason a white would ever want to come in my house. I am deeply honored you even want to bring your friend down to meet me!”

• Regarding life: “When I die, I don’t want to feel I could have done this or that and I didn’t.”

Sister Joann attributes her ability to continue working among people struggling daily with devastating life issues to living with a strong community of sisters also working in Tutwiler: “We have all said many times that we could not continue to minister in this poverty area without that community support. It has become obvious to us that what brought us here and keeps us here is a deep drive to lock our lives in with the poor, trying to live out the Gospel with the people here, but being very conscious of the support we draw from our community life."