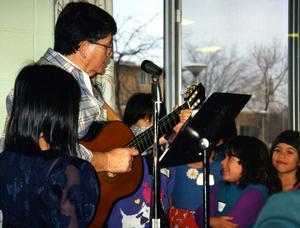 From Missionary to Sacristan

What do Mexico, Native American spirituality, and church services have to do with each other? As S. Vivian Giddings will tell you, all of these have played an important part in her life and ministries.

Before moving to the Siena Center, motherhouse of the Dominican Sisters in Racine, WI, S. Vivian lived in Mexico for 18 years, doing important church related ministry. “I formed nine missions in poor, rural areas where illiteracy is common.” She now returns to these missions once a year, updating them on changes in the Church or diocesan regulations, and visiting with the people. With the help of donations from the sisters and employees of the Siena Center, S. Vivian is able to bring car loads of baby clothes, toys, and other needed supplies to the people of the villages. She is very dedicated to these missions and the people they help. 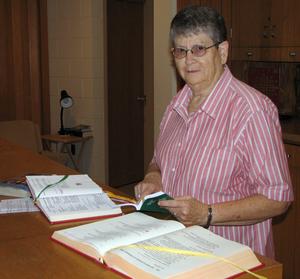 S. Vivian has also enjoyed facilitating a number of retreats based on Native American spirituality. She first became interested in this topic because of her Native American grandfather. As she researched more about the culture and traditions, she found she had a true passion for it. “It’s just terrific,” she said. The retreat-goers also really enjoy their experiences as they learn about Native American drumming, peace pipes, and dream catchers.

S. Vivian’s ministry for a few years was sacristan for the Siena Center. She prepared the chapel for Masses and prayer services, and decorated it for the different liturgical seasons and for special occasions, such as the Jubilee liturgy for sisters celebrating significant anniversaries.

After living much of her life alone in her various ministries, S. Vivian found she really enjoys living in the larger community of the Siena Center. “It makes me feel a part of something bigger,” she said. Clearly S. Vivian has been a part of many things, and she has been – and continues to be – a positive influence on many people.