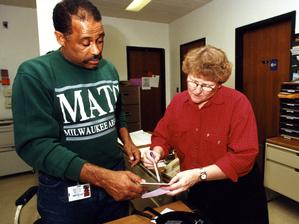 This documentary project spurred the special tribute held on May 22 at Lambeau Field in Green Bay, WI, home of the Green Bay Packers. More than 30,000 Vietnam-era veterans and their families attended the “belated welcome home for Wisconsin Vietnam veterans.”

Sister Linda, who grew up in Berkeley, CA, planned on entering religious life after high school graduation, but the Vietnam War intervened. “I thought I should serve my country first,” she said. And she did just that on active duty for three years as a communications specialist followed by six years in the reserves. She was in the U.S. Army’s First Signal Brigade in Long Binh, Vietnam, in 1969-70.

She is glad to be a part of this documentary, seeing it as a way to help “Vietnam veterans lose some of the shame that society imposed upon them and move forward. So many vets were led to believe they should be embarrassed, or had to hide the fact they served in Vietnam,” she said. “I remember we weren’t allowed to wear our uniforms in the airport because it was considered unsafe to do so.”

With a master’s degree in counseling, Sister Linda is a psychotherapist serving both at the Racine Dominican sponsored HOPES Center outreach, located in central city Racine, and at Psychological & Counseling Services, Inc. also in Racine.

Throughout the years, volunteering with veterans and veterans’ groups has been important to her. Commonly called "Sister Sarge," she frequently works with veterans, especially women, to make connections, deal with trauma, and wade through governmental red tape. Last weekend she facilitated a retreat for veterans.

Sister Linda’s cover photo on the Spring 2010 issue of Wisconsin People and Ideas magazine highlights its story about Vietnam veterans in the state.

‘Sister Sarge,’ a nun from a military tradition, tells her story

11/10 10:34 p.m.
Updated 11/11 12:14 a.m.
BY BILL GUIDA
bguida@kenoshanews.com
PLEASANT PRAIRIE — Before she took her vows as a nun, Sister Linda “Sister Sarge” McClenahan wore Army fatigues, serving a tour of duty in 1969-70 with the First Signal Brigade in Long Binh, Vietnam.
McClenahan, a counselor and psychotherapist serving at the Racine Dominican HOPES Center and at Psychological & Counseling Services, Inc., also in Racine, earned her nickname working at the Wisconsin VA center in Union Grove with homeless military veterans.
Thursday night at the Veterans Day “Service of Remembrance” hosted by Hospice Alliance, Inc., 10220 Prarie Ridge Blvd., McClenahan shared some of her personal story, paid tribute to veterans and spoke of the long history of women serving in uniform.
She was 23 when she got to Vietnam, and about 12 minutes after getting off the plane that brought her there, she was introduced to the reality of wartime service — the eighth generation of the McLenahan family to do so, dating back to her great-great-great-great-great-grandfather fighting in the Continental Army under Gen. George Washington in the Revolutionary War.
Her grandfather fought in WWI, father in WWII. Today, a cousin’s son is headed to Afghanistan, the ninth generation of McLenahans to serve in the military. “To be honest, I don’t know if my family is all that patriotic, or if, being Irish, we just like to fight,” quipped McClenahan, now 60, evoking laughter from the 50 people who filled the room.
She enlisted while still living in Berkley, Calif., where she grew up. In Vietnam, she found herself working 12-hour shifts, six days a week, like fellow personnel snatching sleep when they could on the floor, in chairs, on tabletops.
During the 1969 TET offensive when all of South Vietnam erupted simultaneously with heavy combat, signal personnel worked 50-70 hours straight sending and receiving radio traffic, urgently relaying information from the front to the rear and back again. In the midst of it, she lost her faith, questioning whether God existed at all, given the horrific reality of war. She regained her footing — and her spirituality — after coming to believe war was man’s doing not God’s.
McClenahan said those who come to Hospice likely undergo similar “faith testing,” leaving them angry at times with their God. But, she likened the experience to children getting mad at the parents who love them, saying it’s a normal human response when trying to make sense of things beyond our immediate grasp.
Thursday’s event featured a 21-gun, honor guard salute, the Sweet Adelines Blue Plate Special chapter singing patriotic songs and a medley of George M. Cohan WWII Era numbers, the bugling of “Taps” and a prayer for veterans.
McClenahan called for people to “know whose shoulders you stand on.” No matter whatever reason they serve, they do so under whatever conditions required, including, if necessary, risking life and limb sometimes with less than a moment’s notice, she said.
Whether we believe politically in the cause they’re sent to undertake in duty to the nation, McClenahan said, “we must not let the service of any man or woman be forgotten.”
One of those veterans, Mary Stein, 87, of Kenosha, was presented with a certificate at the event by Kenosha County Veterans Service Officer Derrell Greene honoring her Air Force service from 1945-47.