“Being a sister is such a wonderful experience. My life has been a happy blessing.”
— Sister Evelyn on her 100th birthday

It was the Sunday morning before she was to begin first grade when little Cecelia Novinski first saw them. She had never seen one before, and she just stared in awe. She stared and stared, and finally someone identified what she was staring at … a sister!

Sisters were new to all six Novinski children, and after the first day of school, Cecelia’s oldest sibling informed the family she wanted to be a sister, to which Cecelia declared, “If she goes, I want to go!”

Anna Cecelia was the sixth of George and Wilhelmina Novinski’s 10 children. She was born on the family sheep farm near Reliance, South Dakota, on September 8, 1910. When she was 18 months old, her family moved from South Dakota to a farm near Fennimore, WI. It was at Fennimore’s St. Mary Parish that she and her siblings were introduced to Racine Dominican Sisters. They impressed the children deeply, as three Novinski girls headed to Racine as soon as they were old enough: Sisters Lambertine, Luciana and Evelyn (Cecelia).

S. Evelyn taught intermediate grades for 46 years in schools around Michigan, Wisconsin and New Mexico. She graduated with a bachelor’s degree in education from St. Norbert College in DePere, WI, in 1951 – 22 years after she first began teaching. When her vision began failing, she retired from teaching and moved to Our Lady of the Oaks in Pewaukee, where S. Rosaria taught her to make rosaries. S. Evelyn made more than 11,000 rosaries that she then sent to the missions.

Upon learning her eyesight would continue to decline, she spent two summers in Janesville, attending school for the visually impaired. There she learned to weave baskets, and over the years she created over 980 baskets for use both inside and outside of her community. Having learned to crochet as a child, she also crocheted caps for children, because she was able to feel the work without having to see it.

The grace with which S. Evelyn accepted the loss of her sight epitomized her outlook for nearly 104 years.

In recent years, her hearing also failed, leaving her increasingly isolated, yet she never became bitter. “She was so gentle, kind and prayerful,” S. Marian Diedrick, who spent time with S. Evelyn most days, said. “She always greeted me with that welcoming smile... She was a dear friend, mentor and sister.”

Staff members were also recipients of S. Evelyn’s warmth and kindness. Connie Olson, speaking on behalf of all the aides in Supportive Living, noted, “She was like a grandma to each of us. Just knowing her has made us better people.”

Family remained important to S. Evelyn throughout her life. In later years, when she could no longer see her nieces, nephews and great nieces and nephews, as soon as they identified themselves, she immediately launched into questions indicating she had kept up on each of their lives and remembered earlier conversations she’d had with them.

The day that little girl in Fennimore was so awestruck by seeing sisters, she would never have guessed she’d dedicate 82 years of her life to being one herself – and what a happy blessing that would be. 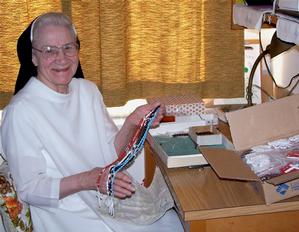 S. Evelyn Novinski has been a Racine Dominican for more than 75 years and celebrated an important birthday this month. On September 8 she tuned 100 years old, and she continues to enjoy her life as a sister at Siena Center.

In her ministry, S. Evelyn spent most of her time teaching. She taught in schools in Wisconsin, Michigan, and New Mexico for 46 years. S. Evelyn found her ministries very gratifying. Her experiences with the children were the most rewarding. “I could see they were learning and that I was helping them,” she said. As her eyesight began to deteriorate, she retired from teaching but continues to cherish the memories of her time with the children.

After teaching, S. Evelyn went to Our Lady of the Oaks, a home for retired sisters which had been located in Pewaukee, where she learned how to make rosaries from S. Rosaria. Even though she could see very little, S. Evelyn figured out that she had made about 11,500 rosaries, and she sent her creations to many missions around the world. Later, she went with S. Ester Novak, SND, to a school in Janesville for the blind and visually impaired. 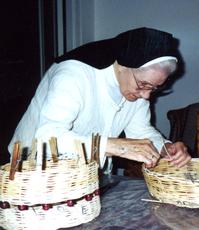 There she learned how to weave baskets, of which she made about 980. S. Evelyn continues with her crafting abilities today by crocheting caps for kids. “I learned to crochet as a child and can do it without looking,” she said.

As she prepared to celebrate her 100th birthday, S. Evelyn recalled how an uncle would tease her about being so pale and frail as a young girl. As part of the celebrations, Milwaukee Auxiliary Bishop Richard Sklba, a Racine native, joined her for lunch at Siena Center. Family members have also been travelling to visit S. Evelyn throughout the month from various parts of the country.

She feels blessed to have been able to celebrate her 75th Jubilee in 2007 and to live among all the other Racine Dominican women who share the same mission and goals. S. Evelyn remembers how long ago she joined the Dominican community the same summer she graduated from St. Catherine’s High School in Racine. “Being a Sister is such a wonderful experience,” she said. “My life has been a happy blessing.”

What first drew you to the Racine Dominican community?

St. Mary’s Parish in Fennimore, Wisconsin, had just built a school, and I was to begin first grade there. None of us children had ever seen a sister, and after our first day of school, my older sister told my mother how nice our Racine Dominican teachers were. My mother said to her, “You would like to join them, wouldn’t you?” My sister nodded, and I made my mind up at that moment that I would, too! Sisters Lambertine, Luciana and I all joined the community from the Novinski family.

What has kept you in the community all these years?

It has been a good life. There were ups and downs, like every life experiences. We were partly cloisteredfor many years, and I enjoyed that. I liked the discipline.

What is one particularly cherished memory of your years in ministry?

I taught second through sixth grades for 46 years. I enjoyed teaching fourth graders the best.

What is one thing people today should know about the Racine Dominicans?

We are a dedicated group.

What do you enjoy doing at this time of your life?

Telling people how to become 100 years old ... just keep on living! I can no longer crochet, but I enjoy listening to books on tape. Sometimes I get three or four books a week. I especially like nature, history, geography and biography books. Right now I’m reading about Teddy Roosevelt.