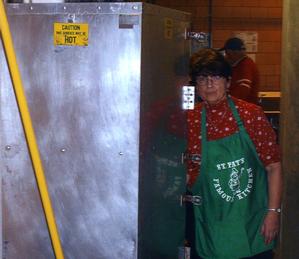 Although S. Mary Watson retired from her position as executive director of St. Patrick Senior Center nearly a decade ago, she still maintains an active role and unwavering presence. S. Mary started the St. Patrick Senior Center in Detroit, Michigan in 1973, a time when many needs of the elderly there were not being met. Approximately 60,000 Detroit seniors 60 years of age or older existed on incomes at or below poverty level. Of those 60,000 seniors, 10,000 lived in the six square mile area known as the Cass Corridor. It was here, in an old school building, that S. Mary and a few volunteers would lay the foundation for the Center.

After weeks of cleaning and painting, the first St. Patrick Senior Center meal was served on July 2, 1973, with seven seniors stopping in to eat it. Today, this daily meal remains an essential part of the services at St. Patrick’s. S. Mary’s background is in dietetics and she makes sure that the seniors get both a hot and nutritious meal. The Senior Center now serves these meals to about 200 elderly people every day. Other services of the St. Patrick Senior Center have expanded as well. They now have a Health Care Clinic, Senior Advocacy, and social and educational activities including art and music classes, dances, field trips, and cultural events. 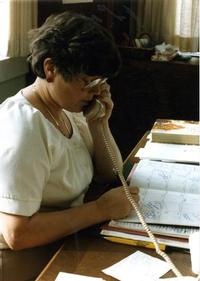 Programs like these show the importance of community for the senior members. “Learning how to care for, respect, and relate to one another is important for the seniors,” said S. Mary. Creating this sense of belonging and community was one of S. Mary’s goals. To do this, S. Mary makes sure that the Center meets the needs of the members by listening to the problems and hearing what the people want. “I wanted to prove to the seniors that they own the Center,” she said.

With this in mind, S. Mary was a bit concerned about retiring because she wanted to make sure the needs of the elderly remained the focus. Yet even though she is no longer the executive director, S, Mary continues to take care of the elderly individually and as a caregiver. She holds power of attorney for several members and is there for people who don’t have the support they need. Additionally, new concerns come up such as intergenerational issues and meeting the needs of the baby boomers. “There is always something to work on,” said S. Mary. 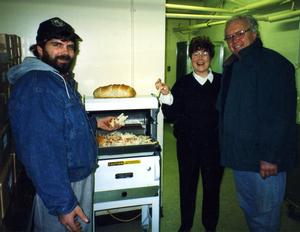 Indeed, she continues to work nonstop for the Center, and her efforts have not gone unnoticed. In 2010, S. Mary received an award for “Michiganian of the Year” from the Detroit News. This award has been given out every year since 1978 to a selection of Michigan citizens who “make living in this state a richer experience for the rest of us, either by good works or by the example they set.” (The Detroit News). S. Mary didn’t know what to expect at first when she got the award, but now many churches and other centers have invited her to speak and share her experiences of caring for the elderly. With more than 30 years of listening to the elderly in the Detroit area, it’s no wonder that S. Mary can provide such insight and witness such passion for this ministry.