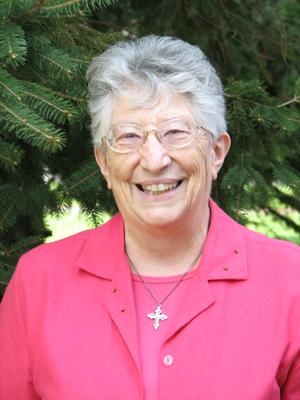 When young Joyce Quintana passed the sisters’ house on her way to the corner grocer, she often heard them chanting the Office, and this inspired her. Her grade school teachers were Racine Dominicans who taught in the school across the street from her home. Joyce often helped them with whatever needed to be done. “They were a very happy bunch,” she remembered. “I was impressed by how they were filled with joy.”

Joyce thought about the sacrifice the sisters made in leaving their Midwestern homes and families to serve in New Mexico. “I thought if they can sacrifice like that to show their devotion to Christ, so can I,” she said.

So, at age 16, Joyce traveled from Santa Fe to Racine to become an aspirant. At her reception she became Sister Felice; then in the 1960s she returned to her baptismal name. At the time S. Joyce was serving in Bolivia, and she was among the first to change from wearing the habit to street clothes. Her four years in Bolivia profoundly influenced her. “It really opens you up to be in a totally different culture,” she reflected. “You adjust your life and values in light of the people you’re working with.”

One of S. Joyce’s ministries in Bolivia was to train upper middle class young women from the university to teach religion to children in the poor barrios. “I think the experience had an impact on these women’s lives,” she noted.

S. Joyce treasures being part of a community where “you can count on support from other sisters as well as being challenged by them,” she said. “It’s a blessing to live in community, to always have people to pray with, to be surrounded by wonderful role models.”

S. Joyce would like people to understand the Racine Dominicans as they are today. “There’s a lot of life in this community. We’re involved in many works of justice and education in a variety of ways.”